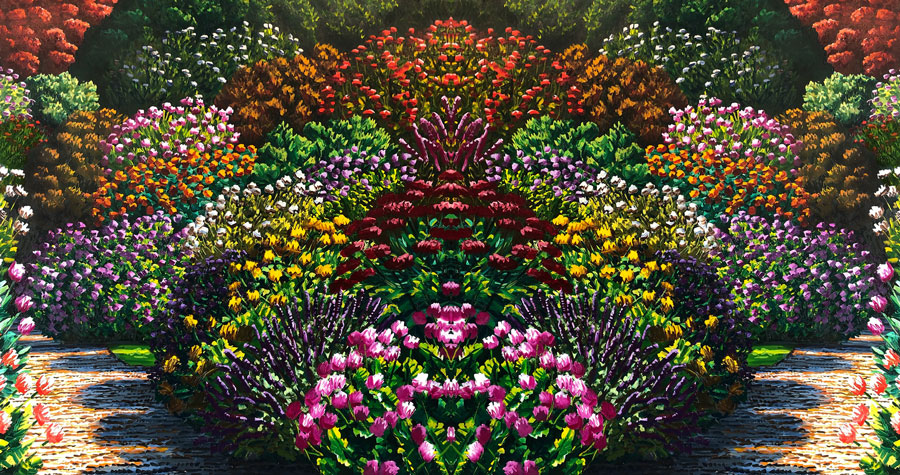 The gardens of Karl Maughan – an entrance into the sublime

Depicted in vibrant, hallucinatory hues, from a distance his works are seemingly photorealistic, up close, however, unfolds an expressive celebration of colour and paint; inviting you into surreal light-filled gardens of wonder.

To engage with his paintings is to be both spectator and fellow wanderer, beckoned on a journey along manicured pathways, mesmerising nooks of manipulated nature, prinked and preened arcadias.

Born in Wellington, growing up in the Manawatu and graduating with Master of Fine Arts from Elam in 1987, Maughan was initially inspired by the tradition of painting en plein-air—as championed by the French artists Boudin and Monet. These days, Maughan prefers to work from photographs, drawing from a vast archive of images and film stills of gardens that he collages together and then paints with thick brushstrokes.

Living and working in the UK in the 90s, he secured his position as one of Aotearoa’s most popular painters. His works deck the walls of the rich and famous and in galleries worldwide – Cate Blanchett is a fan. Next time you’re in Florence, you can find his work at the Art Hotel, or if you’re in the capital, check out his largest painting to date, the enormous and alluring six panel A Clear Day (1999), which is in the permanent collection of Te Papa Tongarewa.

When he was at Art School, Maughan photographed and painted his first garden – at his parent’s home in Ashhurst. Since then, his works have become celebrated for their distinctive style: a navigation of the domestic and the sublime. As he described in an RNZ interview, he continues to return to the subject of the garden for its “endless possibilities”. Indeed, his paintings draw viewers into a world that can be at once enclosed and claustrophobic, and at the same time provide an opening into a fantastical, utopian realm.

Rhododendrons, hydrangeas, wildflowers, hedges, paths: the subjects of his paintings are distinctive for their intricate details and saturated colours as well as their sheer scale.

They’re a comment on the influence humanity has over nature and the ways we intersect with it. Being one half of a creative ‘power couple’ (his wife is the writer Emily Perkins), Maughan’s interest in art spills over into poetry and music, which can be seen in his large book collection in the pair’s Mt Victoria home. Indeed, his work has also been noted for its ‘metaphoric’ quality and can be seen to riff on some of the iconic and archetypal gardens of literature. A stroll through his works conjures thoughts of The Secret Garden, or Austen / Victorian mazes or simply escaping into the fantasy world of the gardens of youth.

Maughan’s paintings can also be linked to the notion of an entrance, as both a noun and a verb. The work he has developed especially for Art Ache’s Studio Sale on Late Night Art comes in the form of 30 long strips of vinyl printed garden imagery from his famous Te Papa Tongarewa work A Clear Day.

Each slice will contain different imagery and be numbered and signed. Selling for $200.00 each, the proceeds from these pieces will be donated to The Women’s Refuge. These pieces promise to entrance the attendees at Art Ache through their verdant allure, so seemingly laden with that ozone-deprived light which typifies New Zealand.

These kaleidoscopic colours, balanced with dark greens and shadows, also bring an entrance into a bright, bold and yet darkly known world. On another level, the empowering aspect of the donation to Women’s Refuge promises to up the feel-good factor of investing in a Maughan piece of your own.

Thank you to Karl’s Auckland dealership Gow Langsford for their support in making this possible.

Proceeds from Karls sales and that of Gow Langsfords are being donated to Women’s Refuge.